We are looking for an experienced PV Recruitment Consultant to join us.

An exciting opportunity has arisen for a Project Coordinator, you will expected to manage projects either in the UK or the US. 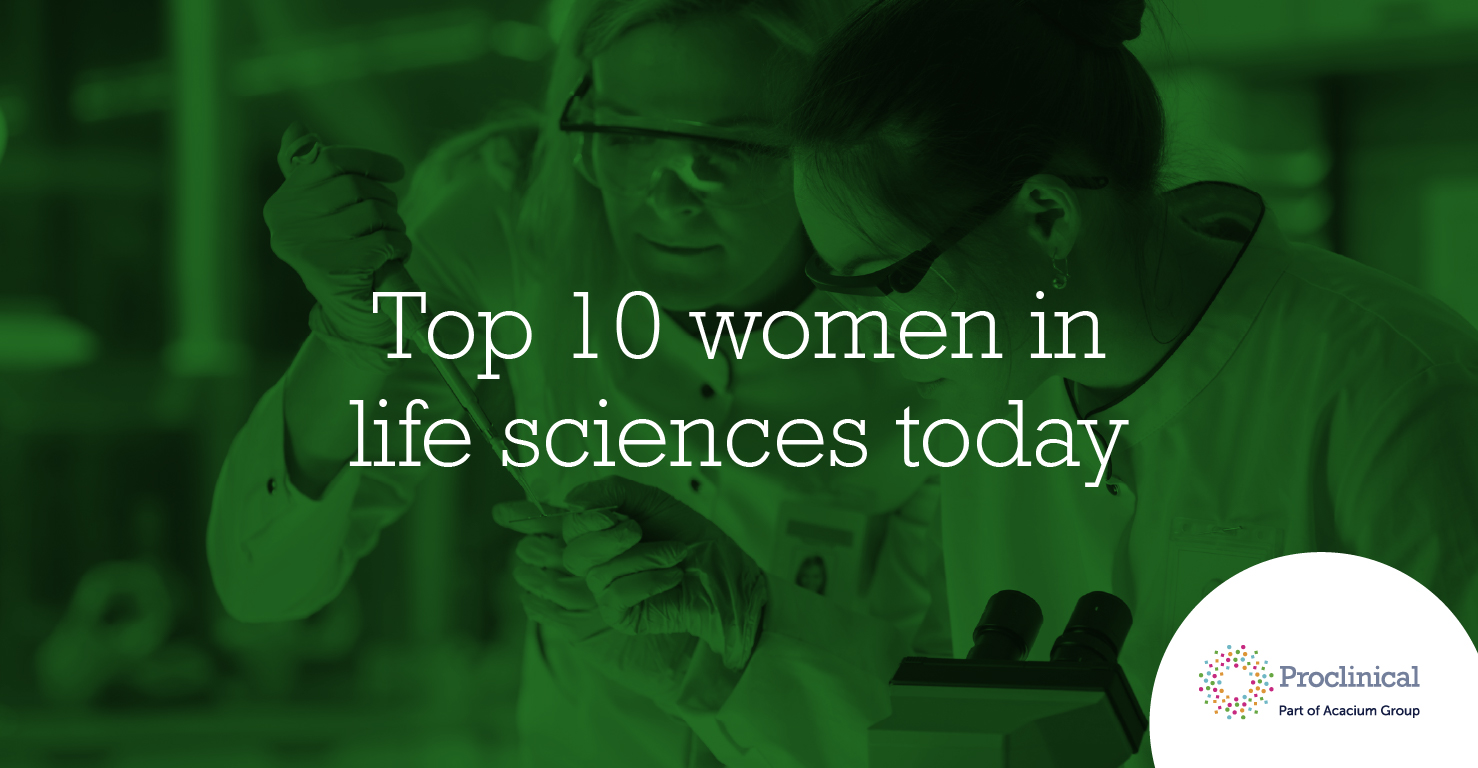 Throughout history, women have made significant contributions to medicine and we have benefitted from many incredible discoveries by female scientists. Famous examples include Marie Curie’s discovery of radium which led to the development of the x-ray, and Rosalind Franklin’s crucial work on understanding the molecular structures of DNA. But what about the women who are changing the world of life sciences today?

From epidemiology to CRISPR, influential female scientists are leading pioneering work in developing breakthroughs for the future of healthcare. As well as this, talented female leaders are continuing to emerge in the most prominent spaces within life sciences; some are running global life science companies while others are founding innovative start-ups. But all are tackling today’s biggest opportunities and challenges in life sciences head on.

Here are just ten of the most powerful women making strides in life sciences today:

What if we could discover a way to extend human life? Biochemist Cynthia Kenyon, who specialises in the genetics of aging and life extension, has shown this could be possible.

Kenyon is best known for her breakthrough in discovering that there is a universal hormone-signalling pathway that influences how two very important genes work: reducing insulin production and boosting repair and renovation activities.

Kenyon’s research has completely transformed our understanding of ageing, with her insights shedding light on the part that genetics play in age-related disease such as cancer and heart failure, “The link between ageing and age-related disease suggests an entirely new way to combat many diseases all at once; namely, by going after their greatest risk factor: ageing itself.”

These discoveries came over two and a half decades ago. Now she works with Google’s Calico with the aim to potentially extend the human lifespan by 100 years.

The partnership between Jennifer Doudna, Californian biochemist and French microbiologist Emmanuelle Charpentier has led to the discovery of a ground-breaking gene engineering tool known as CRISPR. The two women met at a conference in Puerto Rico where they experienced an “electrifying’ moment where they realised that what they were working on, the mysterious Cas9 enzyme, was something really special. After years of collaboration, their work showed that CRISPR-Cas9 could be used to edit bacterial DNA, which has the potential to eradicate previously incurable diseases, such as those caused by genetics and rare mutations. The technology gives scientists the power to remove or add genetic material.

As promising as this technology is, there are a few obstacles to overcome before its true potential can be revealed. For example, there is some debate over the ethics and societal implications of gene editing and where it could lead mankind in the future.

In 2020, Emmanuelle Charpentier and Jennifer Doudna, were awarded the ultimate science prize for their breakthrough research on CRISPR technology and became the sixth and seventh women in history to win the Nobel Prize in Chemistry.

Nina Tandon is an American biomedical engineer who is co-founder and CEO of the world’s first company that grows living human bones for skeletal reconstruction – EpiBone. After choosing to specialise in biomedical engineering, Tandon began her work on using stem cells and electrical signals to help patients ‘grow their own bone’ in cases where they have suffered serious injuries and need a bone graft to replace missing pieces of bone.

Previously, the options available to these patients was to insert bone from a deceased person or to take it from another part of their body; both options carried risk of rejection, disease and infection as each body reacts differently to the treatment. Tandon’s unique medical technology creates personalised bone grafts that offers improved bone formation and regeneration, a simplified surgical procedure, quicker recovery time and no risk of foreign implantation complications. The work of EpiBone could help as many as 900,000 patients who have bone-related surgery every year.

Tandon believes that the technology can be taken further in the future, with pluripotent stem cells making models of patients’ organs that can be used to test drugs and treatments, which could result in a whole new era of personalised medicine.

Cori Bargmann was awarded the Breakthrough Prize in Life Sciences in 2013 for her exciting work on the genetics of neural circuits and insights into the functioning of brain cells. She discovered that changing a single gene in nematode (microscopic worms) neurons could affect their behaviour, such as avoiding certain chemicals or seeking other ones out. It’s thought that these findings could lead to the treatment of currently hard-to-treat neural diseases like Alzheimer’s and autism.

In an interview with R&D magazine, Bargmann describes the thrills of being a scientist: “with your own hands, your own eyes, you could discover something that’s never been seen before. As soon as I knew that, I was hooked.”

German neuroscientist Katrin Amunts gained global recognition for her advanced work in brain mapping and the 3D construction of the human brain, known as Big Brain, that she has spent her career creating. This ‘digital atlas’ of the brain is at the heart of the wider Human Brain Project, which is a decade-long initiative that aims to unlock the many secrets of neuroscience to enable us to develop better medicines for diseases of the brain.

In an interview, Amunts describes her fascination with the workings of the human brain, “It is one of the most complex systems in nature, [which] changes throughout the whole lifespan and varies between human subjects. Understanding the human brain means to understand its capabilities, but also diseases.” It is to this end that Amunts dedicates her research, hoping that an atlas that maps the structures of the brain will improve our understanding of its complexities and advance our abilities in curing brain-related diseases such as depression, anxiety, dementia and Parkinson’s.

Aside from her research, Amunts also manages to Chair the Science and Infrastructure Board of the Human Brain Project, as well as holding the position of Director of the Institute of Neuroscience and Medicine of Research Centre Juelich in Germany, all whilst being a professor for Brain Research at the Heinrich-Heine University Duesseldorf.

Hailed not only one of the most powerful women in the pharmaceutical industry but also among the most successful business women in the UK, Emma Walmsley has made an incredible jump from the head of GSK Consumer Care to being appointed the company’s chief executive officer in early 2017.

Since joined, Walmsley has embarked on a dramatic shake-up of the company. Including the spin-off of the company’s consumer health division, which was merged with Pfizer’s consumer healthcare business in 2019. Despite initial reservations, the strategy is paying off and she has managed to breathe new life into the business by taking calculated risks.

Walmsley’s success in the pharma industry is even more impressive as she doesn’t come from a scientific background, instead gathering her remarkable skillset from the various marketing and general management roles undertaken during her 17-year career at L’Oreal.

In 2020, Reshma Kewalramani made history when she became the first female CEO of a large biotech company, Vertex Pharmacueticals.

Dr. Reshma Kewalramani has dedicated her career to improving the lives of patients, including the last 15+ years through the development of new medicines.  After spending 12 years at Amgen, Kewalramani joined Vertex in 2017 as its senior vice president of late development before succeeding then-chief medical officer in 2018. That year, Vertex scored expanded approvals for its cystic fibrosis drugs Orkambi and Symdeko. In 2019, the FDA approved Trikafta, that is expected to extend and improve the quality of live for cystic fibrosis patients.

Angela Hwang is a member of Pfizer’s Executive Team and Group President of the Pfizer Biopharmaceuticals Group. Her organization of 26,000 colleagues across 125 countries is responsible for bringing over 600 innovative medicines and products to patients and generating 80% of Pfizer’s revenue.

Hwang played a pivotal role in influencing the planning of the logistics for Pfizer’s Covid-19 vaccine efforts, such as how to keep it at the right temperature and how to transport it. Hwang is also at the centre of the direct-to-consumer campaign which is aimed to instil confidence in the Covid vaccine.

Garijo joined Merck in 2011 after working for Sanofi. She was first chief operating officer of the EMD Serono biopharma franchise at the German drugmaker before moving up the rank in 2015 to become CEO of the then-overarching healthcare department. Under her leadership, Healthcare at Merck has become a key player in the area of oncology, immunology and immuno-oncology, after the profound repositioning of the portfolio, the transformation of R&D and the alteration of the commercial model.

Belin Garijo, will join Emma Walmsley’s small club in 2021, when she will become the second female CEO of a Big Pharma company, Merck KGaA. In 2019, GSK paid up to $4.2 billion for Merck KGaA’s cancer immunotherapy, binstrafusp alfa, as GSK remains keen to increase its presence in onocology. Now, with Garijo’s appointment, the immunotherapy will witness a collaboration between two large biopharma firms with female CEOs at the helm.

Who on this list do you find most inspiring? Let us know your thoughts in the comments below.

We are looking for an experienced PV Recruitment Consultant to join us.

An exciting opportunity has arisen for a Project Coordinator, you will expected to manage projects either in the UK or the US.

Are you looking to join a biotech that has its eye on meteoric growth? How about a company that is focused on employee growth and development?

Are you looking to join a biotech that has its eye on meteoric growth? How about a company that is focused on employee growth and development?

Proclinical are in search for a contract Research Scientist who will be involved in a range of process development activities.

Proclinical is currently recruiting for a remote Senior/Clinical Research Associate for a global provider of drug development solutions.